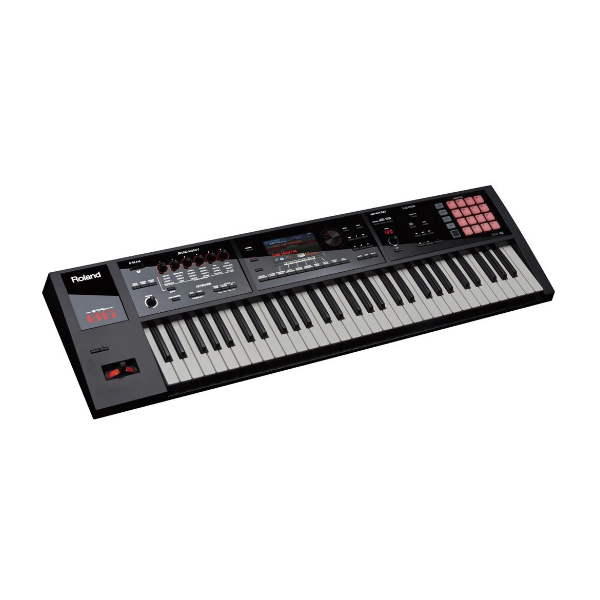 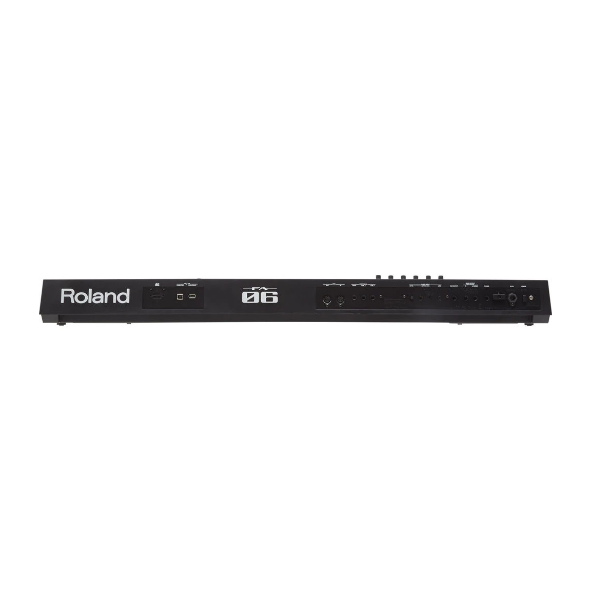 Take your music-production rig to a whole new level with a Roland FA-06 keyboard workstation!

No single piece of gear Roland has introduced since their Fantom series keyboards even come close to offering you the no-holds-barred music-production power of the FA-06 keyboard workstation. It all starts off with the sounds – a collection of over 2,000 patches taken from the flagship INTEGRA-7 sound module including the complete SuperNATURAL synth engine. Add to that an absolutely astonishing set of effects and processors, and you’re still just getting started. Powerful on-board sequencing and sampling let you build up your tracks, and killer performance options make playing on the FA-06 a blast. Top it off with an awesome user interface, total DAW integration, and a great-feeling semi-weighted 61-note keyboard, and you’re in business!

Packed with the sounds and affects you need to create anything
The conventional wisdom at Musiekwereld is that even the best keyboard workstation isn’t worth much without the right sounds. That’s why our Sales Engineers are happy to point out the Roland FA-06. This amazing keyboard comes loaded with over 2,000 sounds taken straight from Roland’s flagship INTEGRA-7 sound module. This includes the complete SuperNATURAL synth engine (giving the FA-06 the capacity to download entirely new synth sounds) plus a killer set of acoustic tones, drums, and much more.
And you can add even more sounds via the FA-06’s internal wave sound expansion slots. And if that wasn’t enough, the FA-06 comes loaded with 16 independent MFX engines, six COMP+EQ processors, a TFX (total effects) section, global EQ, chorus, and reverb. Talk about creative possibilities!

Brilliant user interface designed to keep you in the creative zone
Ask any keyboard player or pianist, and they’ll tell you that feel is a major consideration when it comes to picking the right workstation. Roland has always prided themselves on the feel of their keyboards, and the wonderful playing response of the FA-06’s semi-weighted 61-note keyboard goes quite a way to prove that. But Roland took the same painstaking approach with every part of the FA-06, providing it with the best-feeling pads and the easiest-to-use control layout possible.
From its oversized colour LCD to its various control sets, everything about the FA-06 was designed so that you could sit down, put your hands on the controls you need, and start making music. For example, there’s a separate SDHC slot for the SP-404SX style groove sampler, and dedicated controls for tweaking your sounds on the fly. And that’s just the tip of the iceberg. The important thing is that when you sit down in front of your FA-06, it’s not the overwhelming experience of interfacing with some monolithic workstation – it’s like stepping up to a studio full of high tech gear that’s all wired to work together flawlessly.

From studio to stage, this is the keyboard workstation you need
How many keyboards do you like schlepping to the average gig? Does the thought of lugging around a full keyboard workstation worry you just a little? The Roland FA-06 is the answer to all of your keyboard-related dreams, packing a full studio’s worth of music-creation potential into a format that’s light enough and small enough to take with you. Powerful real-time performance options such as D-Beam modulation, arpeggiation, looping, and step sequencing make playing out fun and exciting, and the fact that all of these functions are easy to get to and intuitive only makes it all better.
Back in the studio, you’ll be impressed by how easily the Roland FA-06 keyboard workstation folds into the rest of your setup. With the push of a button and a simple USB connection, your FA-06 becomes the centrepiece of your studio, acting as your audio interface, MIDI keyboard, control surface, pad controller, and more. What’s more, you can connect your FA-06 to your Apple iPad via the camera connection kit, providing you with even greater production power when you have to take your rig on the road.

What Roland Says…?
Roland’s FA series completely reimagines the music workstation, streamlining it for effortless real-time power, ultra-fast workflow, and maximum versatility. Each model in the series features a massive sound collection, studio-quality effects, and expressive real-time controls, plus on-board sampling with zero load time for instant playback from 16 pads. An integrated sequencer offers simple operation and non-stop loop recording, and you can easily export tracks for further development with your DAW. Available models include the 61-note FA-06 and 76-note FA-07, which both feature velocity-sensitive keyboards with synth action, and the FA-08, which features an 88-note keyboard with weighted action.

No Work, All Play
Music workstations play an important role for keyboardists in a wide range of creative activities. However, they can often be complicated and difficult to use to their full potential, bogging down the creative process. In developing the FA series, Roland has completely reimagined the music workstation to let your inspiration flow, allowing you to perform on stage and develop musical ideas with less effort than ever before.

Perform and record with a massive selection of Roland’s very best sounds
Packed with over 2000 tones inherited from the INTEGRA-7, Roland’s flagship pro sound module, the FA series offers a huge palette of high-quality sounds for virtually any musical style. All of the INTEGRA-7’s SuperNATURAL synth and XV-5080 PCM tones are on board, plus an essential collection of expressive SuperNATURAL acoustic tones that include pianos, organs, bass, strings, and many others. And with the newly added Tone Remain function, you can switch sounds seamlessly with no notes or effect tails being unnaturally cut off.

Capture ideas and create songs without interruption
The FA series’ intuitive 16-track sequencer has been designed to let you capture your inspiration as it happens. In a flash, you can build a full arrangement with the instrument’s huge array of sounds. And with continuous recording in loop mode, you’re able to fill up all 16 tracks without ever stopping! In addition to real-time capture, step recording is also possible, and you have complete control to edit and mix your tracks as you go and save songs as stereo audio files to an SDHC card.

Enhance your sounds with a wide range of simultaneous effects
The FA series provides numerous options for polishing your sounds and sequencer tracks to studio-level perfection. Independent MFX engines are available for all 16 parts of a studio set, and with the unique TFX (total effects), you can process the entire output with dramatic effects such as DJ FX Looper, Isolator, and others. All the effects can be tweaked with the Sound Modify knobs to add real-time expression to your performances and productions.

Fast workflow and intuitive real-time control
You can feel the speed of this new breed of instrument the moment you hit the power switch—unlike many workstations that can take a minute or more to boot, the FA series is ready to play in seconds. The panel is logically organized into dedicated sections, and the large colour LCD presents a gorgeous look with inviting hi-res graphics for selecting tones, working with the sequencer, and adjusting various settings. And it’s a breeze to navigate through the large sound selection by category and assign your favourites for fast recall.

An instant-access performance sampler at your fingers
The sampler in the FA series features fast, hands-on operation and sampling/playback via convenient SDHC cards. You can play audio samples directly from the 16 pads on the front panel, making it easy to expand your performances with loops, backing tracks, one-shots, vocal phrases, sound FX, and more. And thanks to SDHC flash memory, your samples load instantly, with no wait time at all.

Studio sets enhanced for master rig control
In the FA series, a studio set stores 16 tones and the various parameters associated with them, including level, pan, effects, and more. Now, master control functionality has been added to studio sets, enabling you to use the FA as a master controller for a large studio or live rig. You can save MIDI messages like bank select, program change, volume, and many others. This info is sent out via MIDI when you select the studio set, letting you reconfigure the FA and multiple external devices with one command.

Seamless DAW integration
In addition to its impressive standalone performance, the FA series easily transitions into any DAW environment. With a press of the DAW Control button, you can instantly set up the keyboard to communicate with your software via USB.* Dedicated control maps for popular DAWs provide quick setup for operating transport functions and other parameters in your software. In addition, you can use the FA as a USB audio interface to record a variety sources directly into your DAW and monitor them through the stereo output and headphones jack. A free license for Ableton Live Lite is now included with every FA keyboard, enabling you to pair up your instrument with a powerful DAW right away.