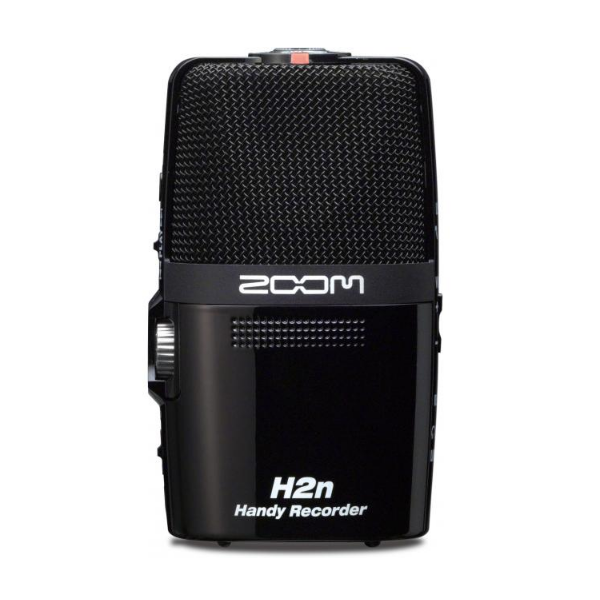 Handheld SD Recorder with Five Internal Mic Capsules, and the Ability to Record In 360-degree Surround and Mid-Side Formats

A Super-handy Recorder with Five Mics On-board!
The versatile Zoom H2n handheld recorder seriously raises the bar for portable recorders — and not just other handhelds! With five on-board microphones and a ton of recording options, the H2n is more than just a handheld recorder, it’s a pocket-sized recording studio. It can record in conventional XY stereo, 360-degree surround, and even Mid-Side stereo — all with pristine detail! Whether you’re a singer/songwriter or a whole band, capturing live music or samples for sound design, you’re going to love recording with the ultra-versatile Zoom H2n!

Five microphones, tons of possibilities
This handy handheld recorder puts five of Zoom’s best microphone capsules in the palm of your hand, giving you the perfect pickup patterns for any situation. Set the H2n to conventional XY stereo mode to record your band’s next show, or set it to Mid-Side stereo mode, which lets you adjust the stereo spread — even after you’ve recorded! Plus, the H2n can also record in 360-degree surround recording, which is just what you need to capture interviews, band practices, and more.

Record with total confidence
Don’t suffer the frustration of losing your work, ever again! When Zoom set out to make the H2n, they decided to make it as reliable as possible. Even if your H2n loses power in the middle of recording, its auto recovery mode will restore your recorded data, as soon as you power it back up. But that’s not all. The H2n also comes equipped with an on-board compressor/limiter, and an analog gain circuit, protecting your recordings from nasty digital clipping.

Freakishly simple to use
With all of these exciting and super-useful tools on-board, you might expect the H2n to be complicated to use. Don’t worry, Zoom built this handheld recorder to be incredibly easy to use? You can access all of the H2n’s most important functions right from the front panel. Even switching from Mid-Side mode to 360-degree surround sound mode just takes a twist of a dial. Recording with the H2n couldn’t be simpler.

Great in the studio too
And as if all of these reasons weren’t enough make the H2n a truly must-have recording tool, here are a few bonuses. First off, the H2n comes equipped with USB 2.0. Not only does this let you quickly transfer your recordings to your computer, it also lets you use the H2n as a USB microphone. How cool is that!? What’s more, the H2n comes with Steinberg’s Wavelab LE 7 recording software, so you’re ready to record, mix, and master projects, right out of the box!