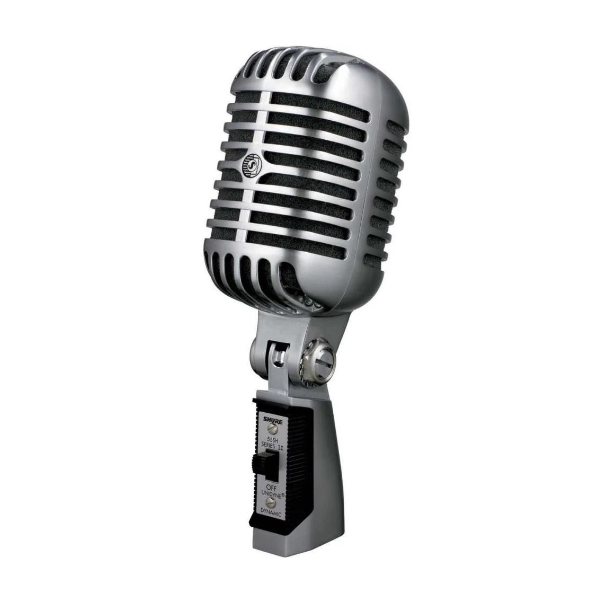 Classic Looks with Modern Performance!
You’ll love Shure’s 55SH Series UNIDYNE II if you long for the days when mics carried a little weight and substance, and dig the look and feel of the classic mics of the ’50s and ’60s. This cardioid dynamic vocal mic updates Shure’s UNIDYNE series with classic looks and thoroughly modern performance characteristics. Vocals sound incredible through this mic! Features of the 55SH UNIDYNE II include low impedance, a frequency response of 50Hz to 15kHz, and an on/off switch. Make a statement with your Shure 55SH UNIDYNE II mic today!

Stage-ready looks
When encountering this mic for the first time, the sonic characteristics aren’t exactly the first thing you’re going to notice. The Shure SH55 UNIDYNE II, while sounding great, is an absolute showpiece when rocking with your band on stage. It’s signature satin chrome-plated die-cast casing really makes it stand out in the crowded field of dynamic microphones, vying for your attention.

Modern-sounding performance
With its obviously vintage leaning looks, the SH55 UNIDYNE II offers you the modern performance that you expect from a Shure microphone. Like some of Shure’s other classic designs, the SH55 UNIDYNE II has a voice tailored for speech and other vocals with a very present top end. And it even works great on instruments, really helping them cut through a dense mix.

Cardioid pickup pattern
Since this mic is designed to rule a loud stage, the SH55 UNIDYNE II was designed with a cardioid polar pattern. That makes sure it’s getting your vocals out to your audience, without also sending out the loud din of the rest of your band’s sound bleeding through. It’ll give you just what you want, and none of what you don’t.