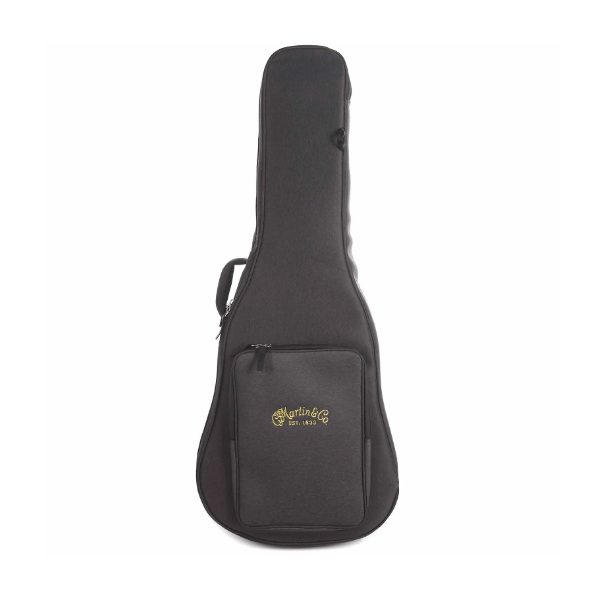 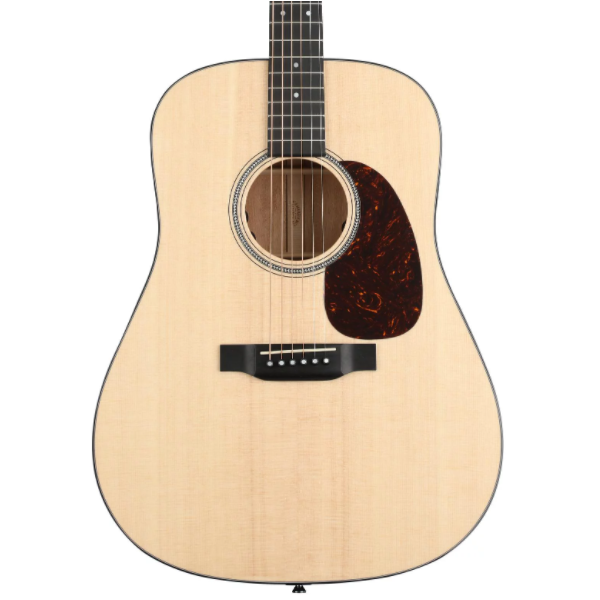 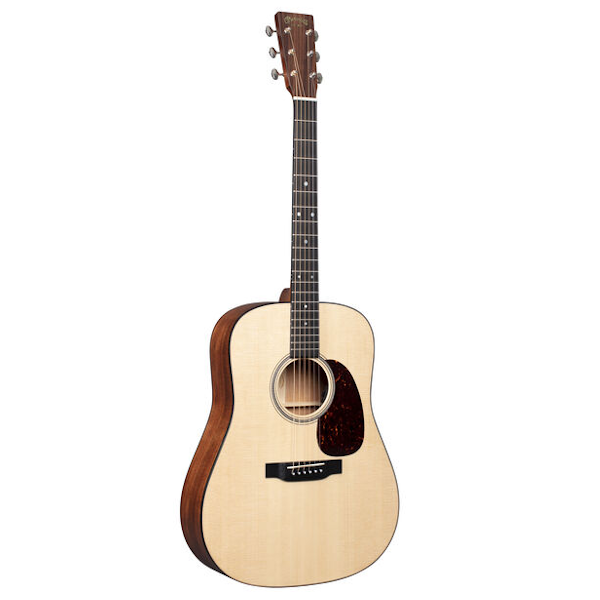 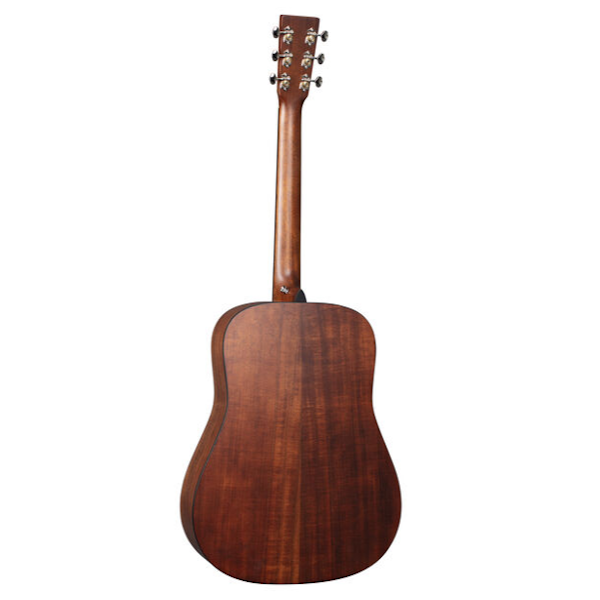 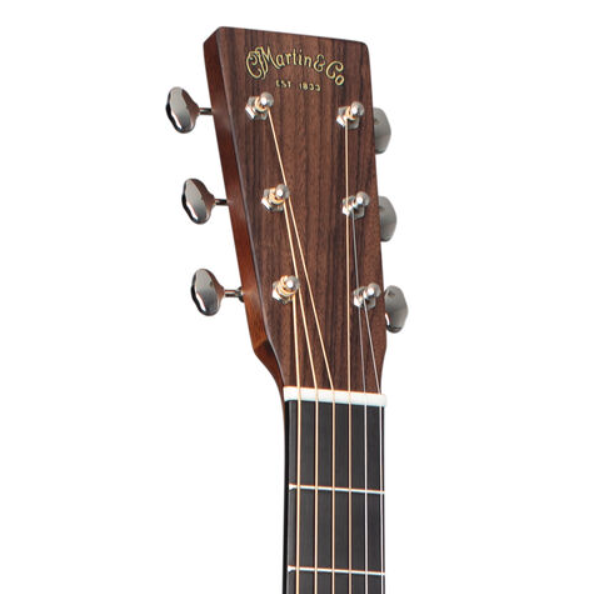 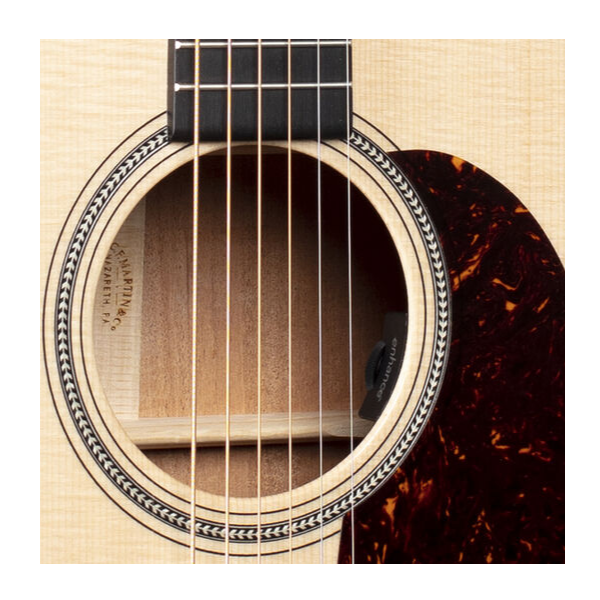 This Martin D16-E emanates with richness and warmth from its mahogany body and Sitka spruce top. One strum and you’ll be struck by its full, round tone and ultra-smooth top end. The Martin D-16EM features a scalloped, forward-shifted Sitka spruce X bracing that draws out the guitar’s most flattering characteristics by providing balanced, clear resonance and powerful, room-filling projection. The luxurious tone, coupled with a comfortable dreadnought body shape, makes the D-16EM ideal for singer-songwriters, and its distinguished sound sits impeccably in full-band arrangements. When you’re out gigging and need to electrify, the D-16EM’s Fishman Matrix VT Enhance NT2 pickup system delivers pristine amplification that retains all of the guitar’s nuance. A favorite of guitarists at Musiekwereld, Martin guitars are revered for good reason, and the all-mahogany D16-EM is an excellent example of Martin’s dedication to artful designs, supreme tone, and matchless quality.

Martin and Fishman have been working together for over 30 years in an effort to build the best acoustic-electric guitars on the market. And they recently teamed up again to create the Matrix VT Enhance NT2 pickup system that you’ll find in the D-16EM. This system consists of Fishman’s popular Matrix under-saddle pickup and an advanced Enhance element that can be blended into the signal separately via the soundhole-mounted controls. The Enhance function lets the natural sounds of the guitar come through, which is ideal for players using techniques such as body tapping.

A cornerstone of modern music

Martin’s early dreadnoughts set into motion the guitar’s prominent role in modern music and set the standard for tone quality in acoustic guitars. Martin dreadnoughts became known for resonant warm tones, quality craftsmanship, and tasteful styling. For those reasons, Martin guitars became an important part of the music written and performed by the stars of the 1920s and ’30s. Post-WWII, the Martin dreadnought became a cornerstone of the folk and folk-rock music of the ’50s and ’60s. The powerful voice and full sound of these iconic instruments have made them a staple in the bluegrass world, but their bold sonic signature is heard cross-genre. That’s why Martin dreadnoughts are staples in the arsenals of the performing acoustic guitarists at Musiekwereld.

The same body shape at a comfortable depth

When you play the D-16E for the first time, you may notice that the body feels different from other Martin dreadnoughts. It retains the same square shoulder shape but is slightly thinner than normal. Instead of the traditional dreadnought body depth of 4-7/8-inches, Martin opted to give this guitar the depth of a 000 — 4-1/8-inches. This change affects the guitar in two notable ways. First, the thinner body reigns in the boomy bass response for cleaner recording. Second, it helps the guitar to create a more mid-forward response. Don’t fret, even with its new body depth, the D-16E retains the same room-filling power that you expect from a Martin dreadnought.

What hasn’t been said about the CF Martin company? Martin — a name virtually synonymous with the acoustic guitar — took root in the United States in 1833 with a small shop in lower Manhattan. Five years later, Christian Frederick Martin moved his business and family to the rolling hills of Pennsylvania, where Martin has been located ever since. From the Dreadnought body shape to the 14-fret neck, Martin innovations paralleled (and indeed, drove) the development of the acoustic guitar itself. When you play any Martin guitar, you’re holding a piece of music history.