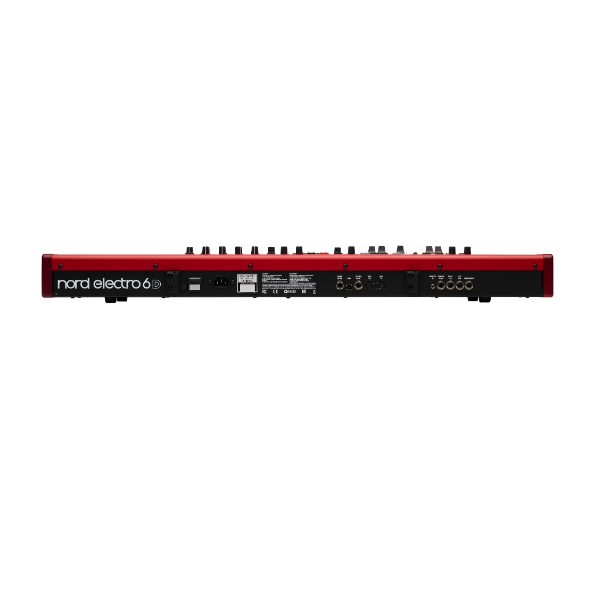 Optimized for Live Performance
The 61-key Nord Electro 6D 61 stage piano/synthesizer brings a new level of versatility to an already established keyboard. Primed for live performance, the Electro 6D 61 offers user-friendly touches like a streamlined interface, enhanced split and layering options, extended polyphony, and much more. Expanded memory now gives you 512MB of memory for the Nord Sample Library, doubling the previously available polyphony. You also get the B3, Vox/Farfisa and B3 Bass from Nord’s C2D Combo Organ. Gigging live just got easier with the Nord Electro 6D 61 stage piano.

Physical drawbars give you real organ feel
Nord’s Electro 6D 61 builds on the success of four generations of Electro Series keyboards. Nord has been listening to fiercely loyal Electro players, and the number one request was for real drawbars, a favourite feature among Musiekwereld keyboard players. Done. Having ready access to physical drawbars gives you the ability to tweak your sound in real time. And a mount for the optional Half-Moon Switch gives you an authentic-feeling control for the rotary speaker settings.

Powerful features give you the tools you need
Nord loaded the Electro 6D 61 with a load of features that make gigging and recording easier than ever. A large OLED display lets you instantly see your settings, effects, and more. You can also set up splits and layers that combine the organ, piano, and sample sections. A dedicated Sample Synth section, with 512MB of memory, offers a large selection of samples and controls for attack, decay, and dynamics. With the Nord Electro 6D 61, you get the warmth of analogy with the road-tested reliability of a sixth-gen digital machine.

Built tough for serious professional use
Touring may be rough on musicians, but it’s the gear that really gets thrashed. The Nord Electro 6D 61 is built to take whatever your tour schedule can dish out, and then some. Nord builds its instruments for serious professional use. The 6D’s 61-key size strikes a perfect balance, offering you two-handed playability in a lightweight, maneuverable chassis.