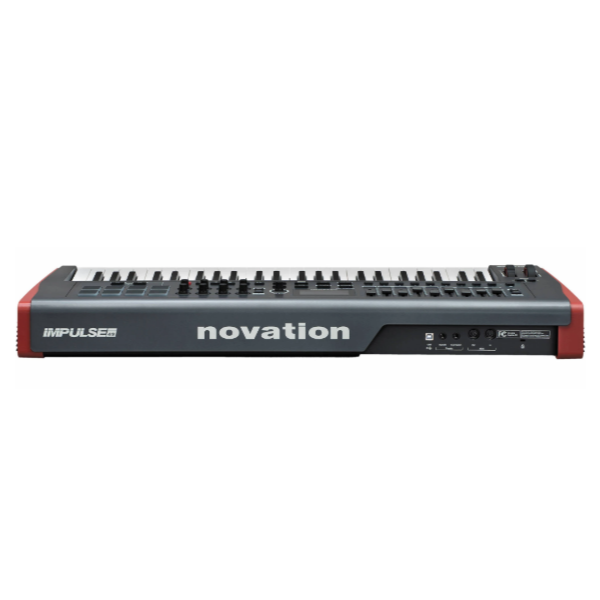 The Novation Impulse 49 USB MIDI controller gives you everything you need to control your DAW with expression and precision. At the heart of the Impulse 49 is its highly responsive semi-weighted keyboard with assignable aftertouch. You get full DAW/plug-in control via 9 faders, 8 rotarys, 8 backlit performance pads, an army of dedicated/assignable buttons and transport controls, and an LCD screen to keep you status-savvy. The Impulse 49 also ships with a tidy collection of cool software and sounds. If you have DAW control issues, check out the Novation Impulse 49.

The Novation Impulse 49’s semi-weighted keybed is first-class. Designed to feel like an instrument rather than a computer accessory, these keys communicate musical expression to your DAW with an efficacy you never thought possible. That’s always been the challenge with MIDI and computer-based music creation – and the Impulse 49 attacks it head-on. The result is better music.

In addition to the superb keyboard, the Novation Impulse 49’s multi-function, backlit drum pads let you roll beats, warp arpeggios, launch clips in Ableton Live, and curb the potential for mayhem that lurks beneath the surface of every complex DAW setup. And with immediate access to your DAW’s transport, mixer and plug-ins, you’ll enjoy increased productivity and focus, resulting in, again, better music.

Works with all major DAWS

The Novation Impulse 49 has been designed and tested to work with all major DAWs and plug-in instruments and effects, including Ableton (Ableton Live Lite comes included with Impulse), Cubase, Logic, ProTools, Reason/Record, Sonar (PC only), FL Studio, Studio One, and Garage Band. Automap 4 control software is the magic that gives you immediate hands-on access to your DAW and plug-ins. In addition, you get Impulse 49 access to your 3rd party plug-in instruments and effects, such as Native Instruments, Waves or FXpansion. In Live, you can even control Scene Launch and Clip Launch using Impulse’s back-lit drum pads. The Novation Impulse 49 is one serious controller.