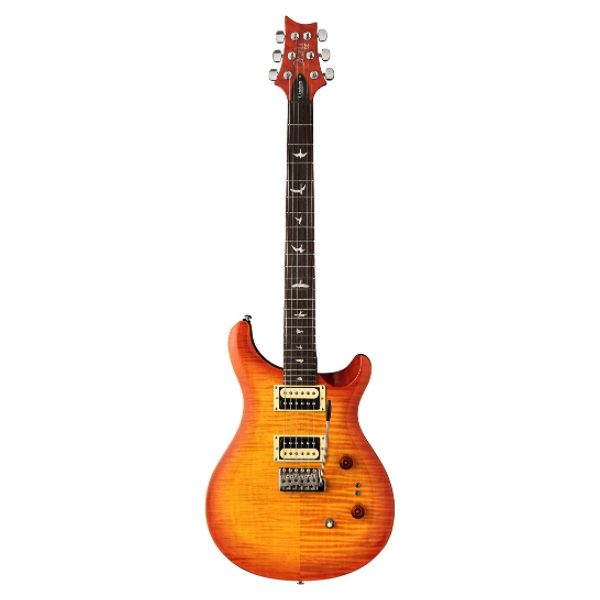 With the PRS SE Custom 24-08 solidbody electric guitar, PRS brings one of their most sonically versatile guitars to their most affordable line of instruments. It’s loaded with a pair of TCI (Tuned Capacitance and Inductance) humbucking pickups and advanced switching options to yield every type of tone a modern guitarist could ask for. Two mini toggle switches serve as coil taps for each pickup, allowing you to switch between fat humbucking tones and chiming single-coil tones instantly — there’s even a “dual single-coil” mode unique to this model. Complete with PRS’s Pattern Wide Thin neck profile for comfortably fast playability, there’s a lifetime of musical exploration that’s yours for the taking with the PRS SE Custom 24-08.

The PRS SE Custom 24-08 guitar is loaded with a pair of versatile TCI “S” humbucking pickups. These pickups are treated to PRS’s TCI (Tuned Capacitance and Inductance) tuning, which means the team at PRS has tapped their years of know-how to sculpt a superb sound. The end result is a very musical pickup that’s true to its lineage, but updated for the modern player. Guitarists at Musiekwereld love these pickups, and we think you will, too.

The “-08” in this model’s moniker refers to the eight distinct tones you can conjure. With the 3-way blade switch you can access the pickup positions you’d expect from a dual-humbucker guitar — neck only, neck plus bridge, and bridge only. The two mini-toggle switches allow you to explore five more combinations — each switch engages a coil tap for each pickup, giving you access to snappy, articulate single-coil tones.

All Paul Reed Smith guitars are designed for performance, right out of the case — and the SE Custom 24-08 is no exception. Constructed from high-quality tonewoods and components, PRS instruments carry on a commitment to quality that’s been the brand’s hallmark since 1985, when Paul Smith began crafting guitars for some of the most elite players in the world. In fact, you’ll often see a PRS SE in the touring rigs of the most well-respected PRS artists in the world.