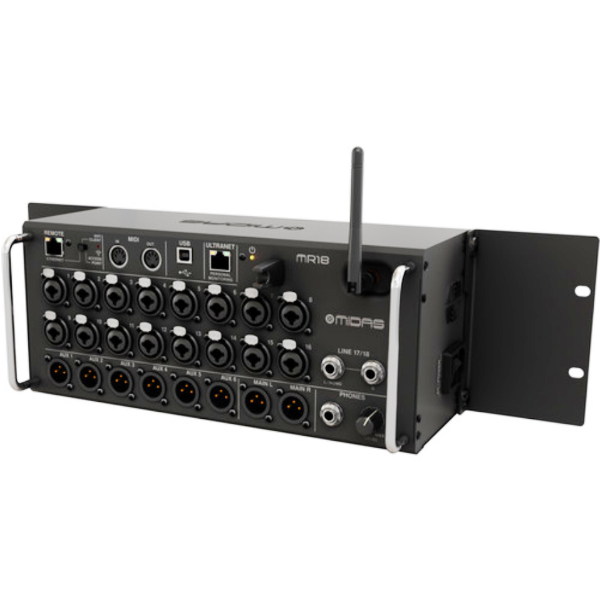 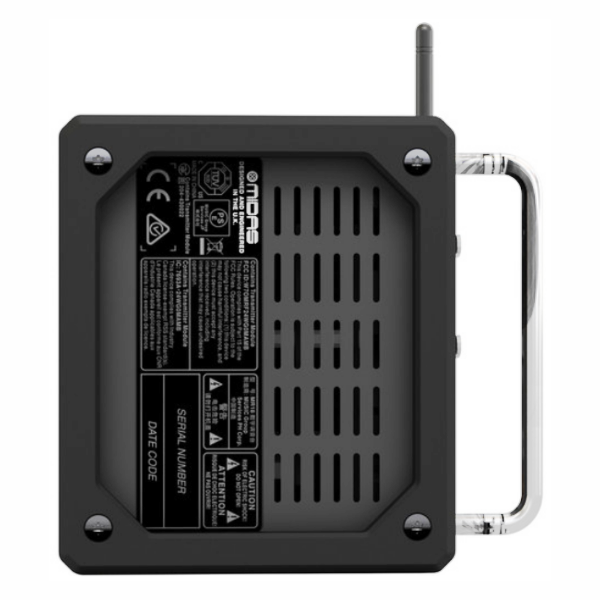 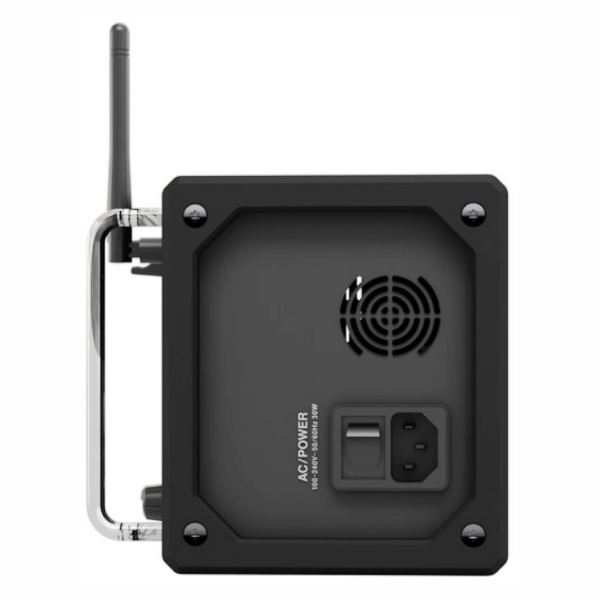 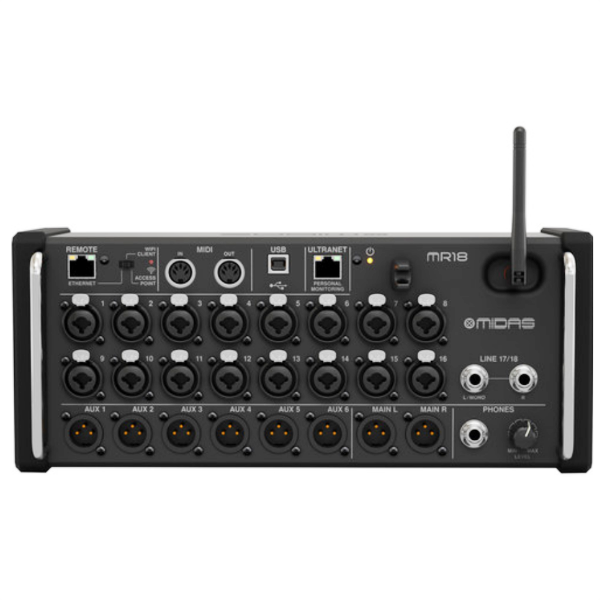 16 Midas Pro Preamps in a Rackmount Mixer
Combining 16 award-winning Midas Pro microphone preamplifiers, four amazing DSP engines, extensive control options, and a full 18-channel audio interface, the Midas MR18 isn’t just a killer digital mixer for live sound, it’s also an amazing addition to your recording studio. It borrows heavily from the highly successful M series mixer line, including essential live sound tools such as four independent DSP effects engines, dynamics and EQ processing for each bus, and Ultranet connectivity for Behringer Powerplay P16 personal monitor system compatibility. What’s more, the MR18 features auto mixing, making it one of the most user-friendly portable mixers out there. Best of all, it fits perfectly in your 19″ equipment rack, so you can easily take all of this mixing power anywhere you go.

Loaded with legendary Midas Pro Preamps
Midas Pro microphone preamplifiers are praised throughout the live sound industry. Their high common-mode rejection ratio and low harmonic distortion produce transparency that’s so good, they are perfectly suited for studio recording as well as sound reinforcement. To make the most of all 16 of these stellar preamps, Midas outfitted the MR18 with 40-bit floating-point DSP architecture capable of sustaining 112dB of dynamic range. It provides the best possible accuracy for the on-board Dugan-style auto-mixing engine. This brilliant bit of processing actually manages microphone levels for you, cutting down the gain of unused preamps and balancing the levels between multiple presenters or performers. Together, these technologies practically guarantee a professional sound.

Flexible DSP for effects, EQ, and dynamics
Powerful digital signal processing is one of the key components that has made the medium-format M32 one of the most popular digital mixing consoles Musiekwereld has carried, and it’s all available to you in the ultra-compact MR18. In fact, the MR18 comes loaded with four DSP effects processors. Choose from legendary studio gear and industry-standard effects that let you enhance your audio in powerful and creative ways. This on-board DSP also extends to the stereo master bus and all six aux buses, providing them with full dynamics processing plus your choice of 6-band parametric or 31-band graphic EQs. If you’ve been running live sound for some time, then you’re probably going to need a smaller rack, because there’s no reason to haul around a ton of outboard gear when you’re mixing on a Midas MR18.

Wi-Fi, Ethernet, and MIDI control onboard
Rackmount digital mixers like the Midas MR18 are always a bit of a daunting concept to anyone who hasn’t used one before. Luckily, Midas has a well-established history of providing reliable wireless control over their digital mixers via a number of avenues. First up, there are free apps for iOS and Android that let you harness the full potential of your MR18 wirelessly, making it easy to control the mix from anywhere. A tri-mode Wi-Fi router built into the MR18 ensures that you’ll always have the best possible connection to your mixer. An Ethernet connection provides even more secure control via your Mac, Windows, or Linux PC with the provided control software. And if you prefer hands-on control, you can hook up any MIDI control surface via 5-pin MIDI or USB and take command of the mix with tactile faders, buttons, and knobs.

Advanced monitor mixing and recording options
The MR18 may be a compact mixer, but its capabilities are absolutely huge. A lot of that has to do with the bonus features Midas included in its design. First up, its Ultranet compatibility lets you connect a Behringer Powerplay P16 personal monitoring system for extensive onstage monitor control and audio distribution. This alone makes the MR18 an ideal mixer for any band who wants to be in control of their own sound. Keep an iPad onstage, and you don’t even need a sound man! Next, there’s the MR18’s full 18-channel USB 2.0 audio interface. This capability is perfect for both studio and live recording, making the MR18 a true all-purpose workhorse mixer.